Visiting David’s museum in Florence: What to see and how to organize your tour 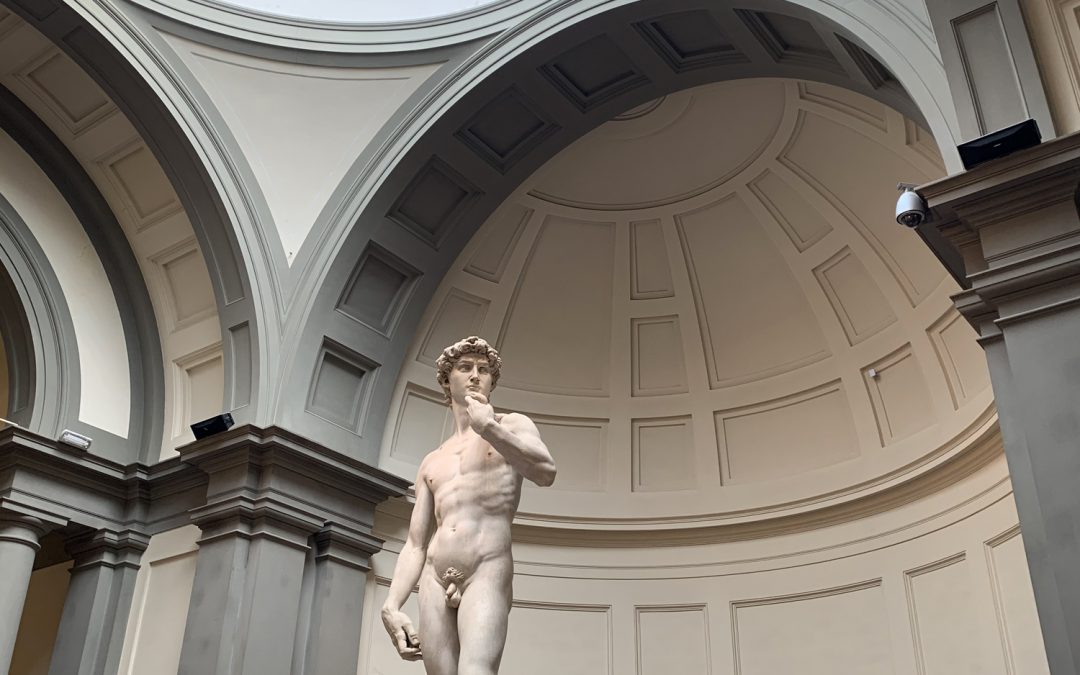 Visiting David’s museum is a definite must for art lovers visiting Florence. To get the month off on the right foot, on the first day of October, I decided to visit the Accademia Gallery, which everyone knows as David’s museum because it has long been home to Michelangelo’s original David, the peerless emblem of Florence and Michelangelo’s sculptural works.

Visiting David’s museum in Florence: How to skip the line 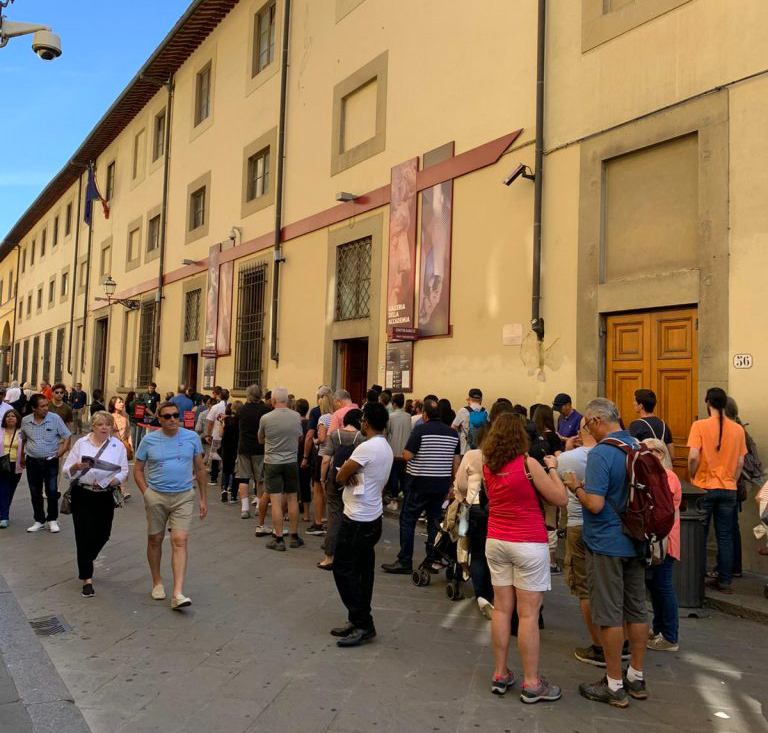 The Accademia Gallery in Florence is on Via Ricasoli, a small street stretching between Piazza del Duomo and Piazza San Marco, not far from the Uffizi Gallery. Walking up the street I can already see a line about a block and a half long to get into the museum. Fortunately, I planned ahead and booked my admission. It is always a good idea to book your ticket to the Accademia Gallery in advance so you can spend your time enjoying the museum instead of waiting in line. Two fun street artists are entertaining the people by playing Italian songs.
The narrow street is teeming with boisterous tourists eager to get into the famous museum. After exchanging my voucher for a ticket, I wait in a short line for booked admissions and then, once inside, the next step is going through security checks. As usual, there are two gruff security guards. Even if you try to smile at them, they will remain as impassive as the Buckingham Palace guards. 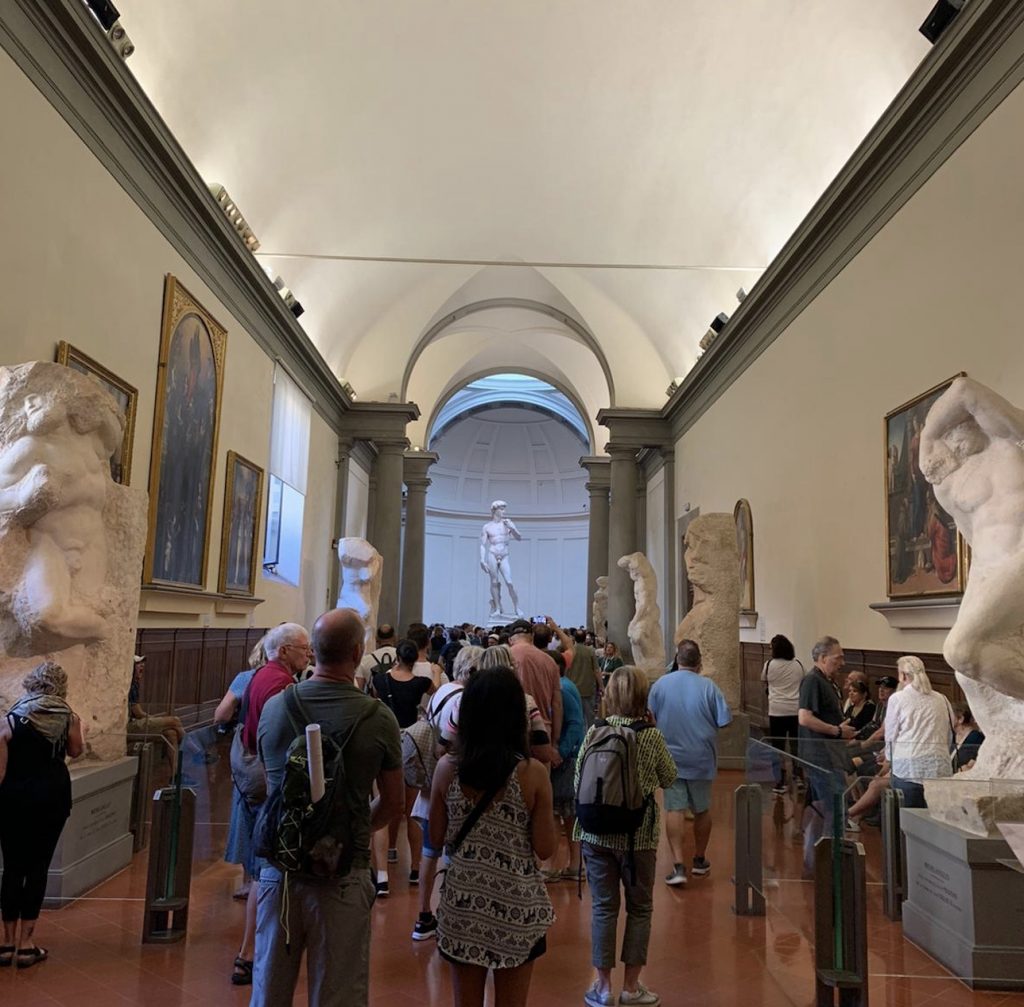 Hall of the Prisoners – Accademia Gallery

The entrance is quite large. Here is where you find the office for collecting the audio guides if you booked them or where you can rent them on site. Now I’m ready to head on in. But first I take the camera out of my backpack. I want to immortalize these works and take them with me like tourists take postcards of the cities they visit. The first room to see is the Hall of the Colossus, named for the colossal sculpture “Rape of the Sabine Women” by Giambologna. The walls on all sides are adorned with 15th-century masterpieces, mostly wood pieces and triptychs. The route continues in the Hall of the Prisoners, sculptures by Michelangelo using his “unfinished” technique.

These works are incomplete. We can see one part has been thoroughly sculpted and the other is an unfinished marble block on top of the started work. This gives us an appreciation of how hard it is to give life to a figure from a formless block of marble. Plus, we can see his process through the marks of the chisel on the surface. The four Prisoners line the long corridor leading to the Tribune. And there he is in all his glory: David.

Visiting David’s museum in Florence: History of the marble colossus 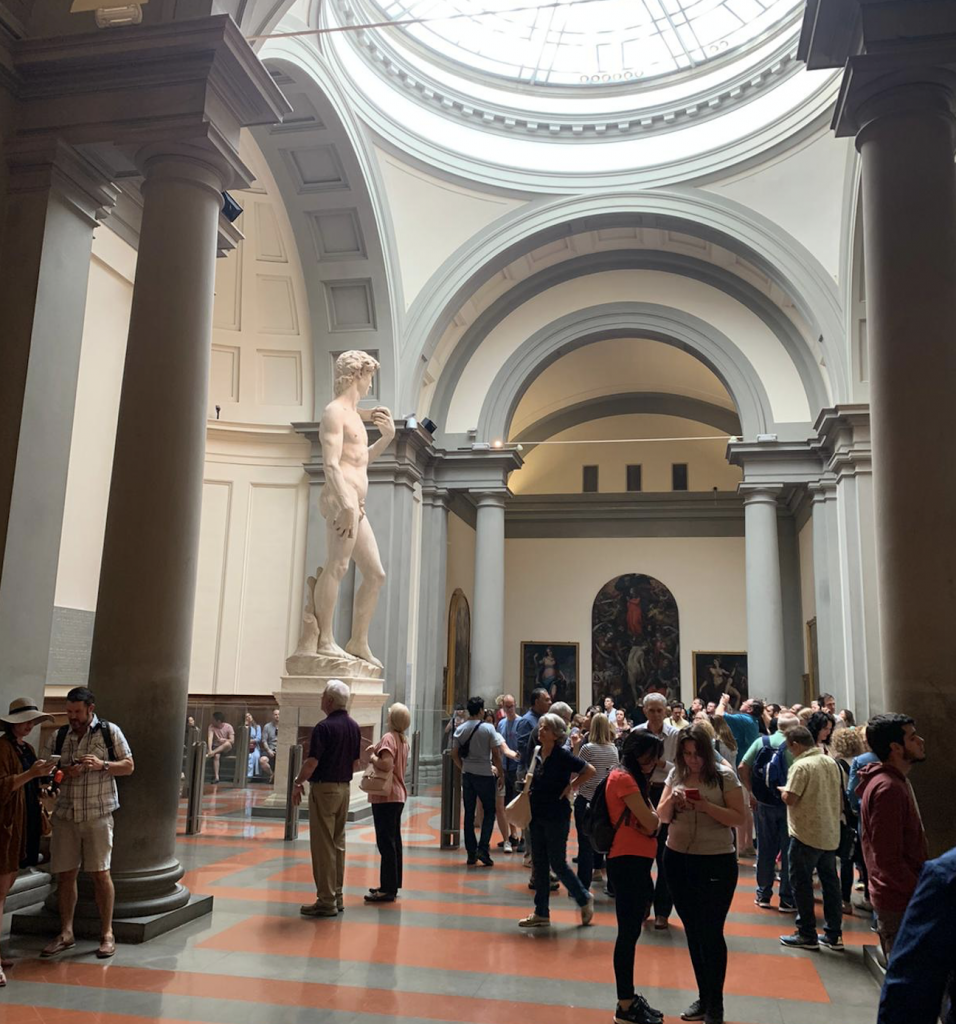 In 1501, Michelangelo was brought to Florence by the Opera del Duomo which commissioned him for a work that was to be as grandiose in size and as it was in its subject. The statue was to represent the legend of David who victoriously struck down the giant Goliath. Michelangelo was to create it using a marble block that was abandoned in the garden of the Opera del Duomo. The block of Carrara marble had actually already been assigned two artists before him who had rejected it because of its “taroli,” small holes in the marble. These were flaws in the marble that they said would undermine the success of such a large work.

The statue was meant to be placed on one of the buttresses of the Cathedral of Santa Maria del Fiore at 80 meters high. Michelangelo did not let himself be discouraged by the condition of the marble. He started to work it incessantly, giving a fresh interpretation to the Biblical event. In an unexpected turn, unlike his peers, he depicted the moment before the battle when the young shepherd was tense, which we can read in the expression of his eyes, his tense muscles, and standing-out veins. David is ready to defeat Goliath, and nothing can stop him. After having been placed in the Piazza della Signoria, David was moved to the Accademia Gallery in 1873 to prevent the elements from damaging it. 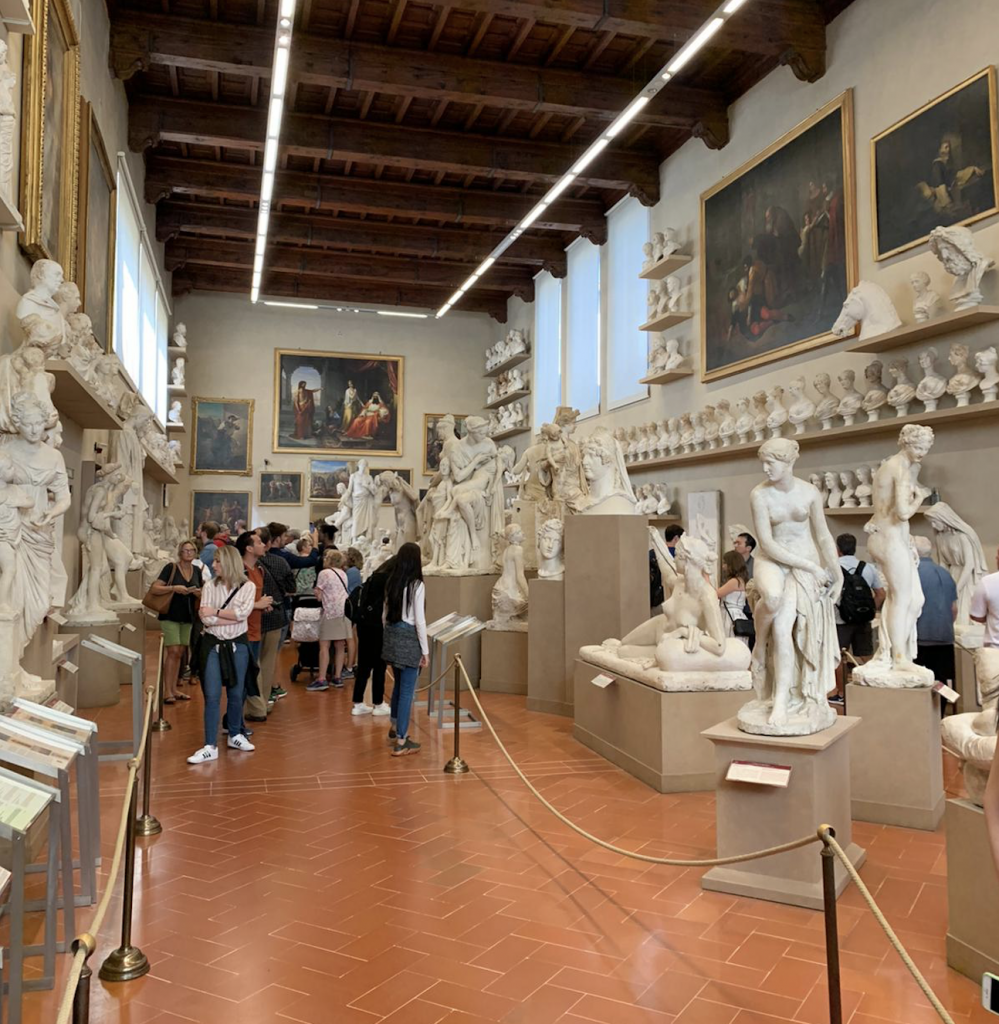 The exhibition route continues in a wide corridor leading to the Bartolini plaster cast gallery. Here, we can admire a collection of reproductions and plaster casts of bronze, marble, and terracotta sculptures. This is a truly beautiful hall and the origin of the Gallery of the Academy of Fine Arts. It was frequented by students who admired and created copies of plaster cast masterpieces, aspiring to become great sculptors. The last room of the museum is on the ground floor and holds thirteenth- to the fifteenth- century painting. These are the oldest works in the Gallery, all religious iconographies from churches or convents.

The stairs to the second floor are near the small bookshop that sells a lot more than books. Though it is small, a large window on the inner courtyard brings light in and makes it a nice spot to take a breather before continuing. If I may give you a bit of advice, bring a hand fan or a little portable fan in the museum because it’s really warm! If you’re waiting to get in during the winter and you’re cold, don’t worry a bit, the Accademia Gallery will warm you up quickly!

While the first floor is crowded and chaotic, the second floor is just the opposite. It’s very calm, and you get the chance to admire the works carefully and in peace. In these rooms, too, the subjects are mostly religious, dating between the 13th and 14th centuries. In the center of the room are some lovely velvet benches that are great for kicking back after this visit and getting your energy back up.

Of course, like in all museums, you can’t eat inside, bring pets, or bring bulky backpacks or other bags. Extra silence is requested, especially because there guides who are giving talks and make some noise. You can take photos but without a flash. The Accademia is open from 8:15 am to 6:50 pm every day except for Mondays, its closed day. I hope this article was useful for you! Have a wonderful day!