Uffizi Gallery, 10 must-see masterpieces for those visiting the Gallery for the first time. As we all know, the Uffizi holds the most important collection of works of art. Starting from the 13th century and continuing past the Renaissance. Giotto, Botticelli, Leonardo da Vinci, Raphael, Titian, Michelangelo, and Caravaggio are just a few of the master artists whose work hangs here.

The magnificent site of the Uffizi Museum

The building, commissioned by Cosimo I to bring join the government’s administrative and judicial offices, was designed by Giorgio Vasari and finished by Bernardo Buontalenti and Alfonso Parigi.
Let’s wind our way through the Gallery’s halls and consider some of its most impressive works.

The symbol of the Uffizi: the Birth of Venus

First, let’s talk about the iconic Venus. Painted by Sandro Botticelli in 1486, this painting is the museum’s emblematic piece. It’s the archetype of Renaissance beauty. Venus on her shell strikes a typical classical pose, and her face seems to echo the features of Simonetta, the wife of Mario Vespucci, cousin of the explorer Amerigo Vespucci, and Giuliano de’ Medici’s beloved.

The Annunciation by Leonardo da Vinci

The Annunciation by Leonardo

This masterpiece is one of the first works by the artistic genius, Leonardo da Vinci. The most striking feature is the attention to detail from the background to the field of flowers depicted in minute detail. The landscape is created with the shading technique that Da Vinci invented, creating a subtle mist effect. This technique made Da Vicini a great innovator, lending substance to the air and making it part of his works.

The Tondo Doni at The Uffizi Gallery

This work is unique on its own! Consider that it is the only Michelangelo painting in Florence. It was probably made for the baptism of Maria, a child of the Strozzi-Doni house. Long thought a wedding gift, its circular shape, which was typical of birth trays, suggests it having been a baptism gift. The dynamism and power of this piece show how Michelangelo was a forerunner of mannerism.

Giotto’s Majesty, from 1310, is clearly revolutionary compared to the other two Madonnas in the second floor room of the Uffizi, by Duccio di Buoninsegna and Cimabue. The details of the cloth draping give three-dimensionality to the majestic work. The angels’ arrangement around the Madonna, the hierarchy of figures, and its plasticity were unquestionably anchored in Byzantine art while opening to a new way of interpreting art.

The figure of the god is depicted in the likeness of a young. He is sitting on the triclinium, is surrounded by the elements that symbolize the god. Caravaggio’s innovation was in depicting with an almost excessive realism. Years of studying the work have led to the conclusion that the boy was a young man who likely prostituted himself. A detail suggested by the dirty sheet behind him. Caravaggio shows us things as they are, without hiding any truth, not even the ugliest.

The Allegory of Spring

Botticelli painted this work in about 1478 for the Medici Villa in Castello. He often returned to the mythological theme. Here, his painting became an emblem of art history. The characters dominating the scene are: Zephyr, Flora, Spring, Venus, Cupid, the three Graces, and Mercury. Each of these figures evokes a specific meaning and the details are of such perfection that they account for the resounding success of this work.

This double portrait emerged from a careful psychological study by Piero della Francesca. The rulers are painted in profile, and the landscape stands out in the background, accentuating the figures in the foreground. A fascinating fact about these works is about how they were painted. X-rays have shown that Della Francesca painted the figures nude. They were only clothed later when applying color.

Uffizi Gallery: the Venus of Urbino

Titian’s Venus of Urbino had a major influence on the history of art, so much so that it inspired artists in centuries to come, the most famous of whom was Manet. Venus covers her privates with one hand, bringing to the fore the most human part of the goddess. The act of letting roses fall alludes to physical beauty withering over the years. Titian’s works often include animals, and the dog’s constant presence is a symbol of fidelity.

Uffizi Gallery: the Madonna with the Long Neck

This is an excellent example of Mannerism, considered excessive yet highly elegant. The painting depicts a very elongated Virgin, and Jesus who looks like a child of about 10 rather than a newborn baby. Despite breaking from classical tenets, the painting has a non-conformist appeal that makes this painting by Parmigianino absolutely worth seeing.

Finally Paolo Uccello. With this triptych, Paolo Uccello proved himself the master of perspective. Its unusual colors, movement, and expressive power give the painting intense emotional value beyond its historic importance. The runaway horses, the spears, and the different perspective planes throw viewers into confusion, taking us into the heat of a real battle. 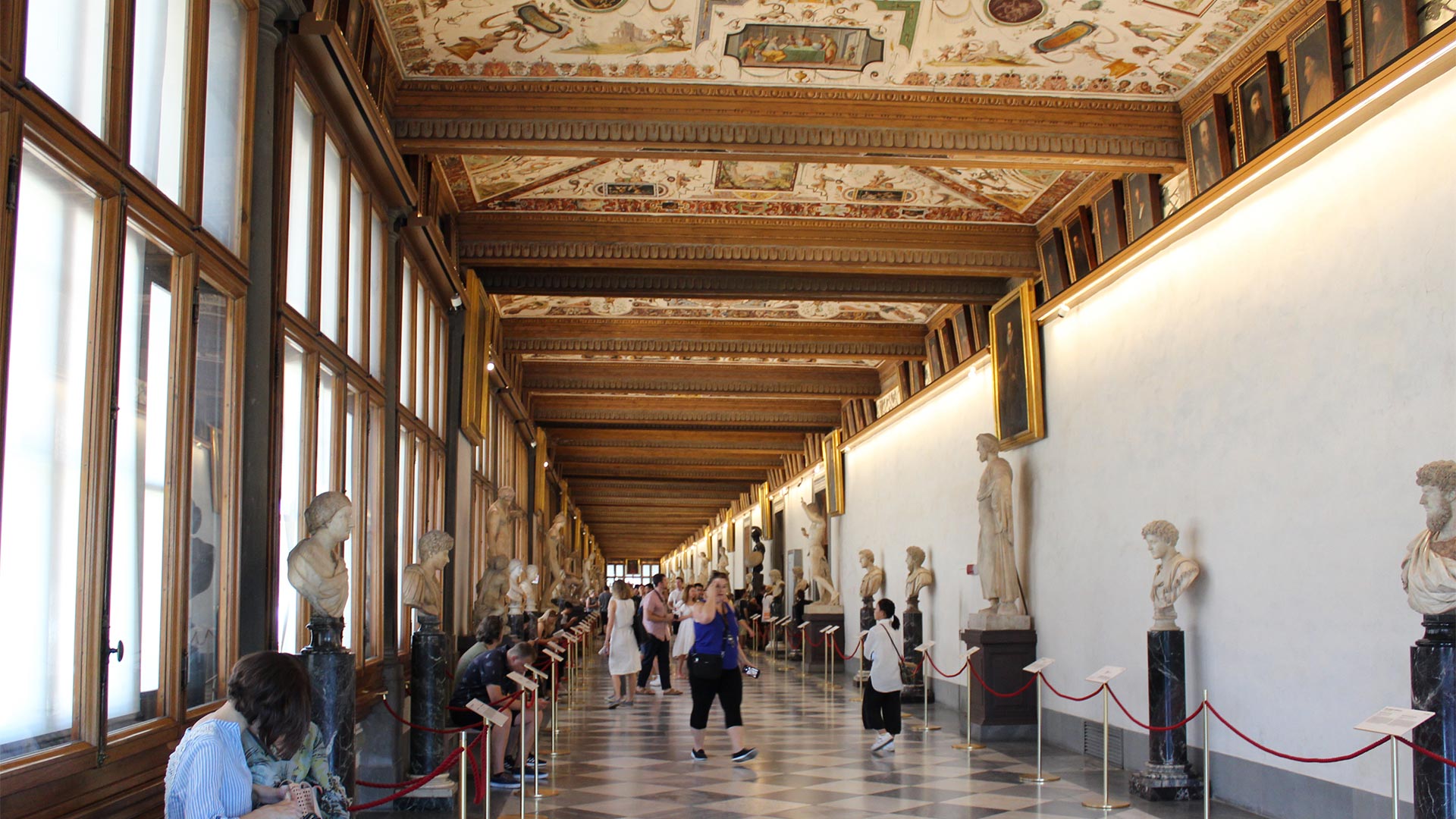 Without question, the Uffizi Museum holds thousands of works of huge value worthy of admiration. Always remember to plan your visit well by booking a skip-the-line ticket to the Uffizi. Today we only talked about the 10 must-see works. But we have a great deal more to tell you in our next post about Filippino Lippi and his Madonnas.